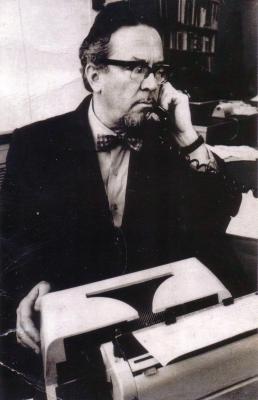 RONNIE BEDFORD, who has died aged 90, was science editor for the Daily Mirror for almost a quarter of a century. And even by Fleet Street’s standards he was an extraordinary character.

He overcame speech and eyesight handicaps to become arguably the best populariser of science and medicine for a tabloid audience. He managed to do it without having any university background, learning the subjects through voracious reading and “picking up enough knowledge to avoid asking daft questions of those who know all about such things”. Ronnie was also an accomplished jazz pianist who could liven up any party, no matter how spontaneous.

Totally blind in his left eye and with poor eyesight in his right, his speech was hampered by a cleft palate that often made it difficult to grasp what he was saying. Mirror colleagues recall him holding copy inches from his nose, peering at it through spectacles with thick lenses.

He was educated at Wakefield College, his tuition fees being paid in part by a charity. In 1934, he won the open class for under-14s at the London music festival. His began his journalistic career at the Wakefield Express as an errand boy and sweeping the print shop floor. Just before the outbreak of World War II, he landed a junior reporter’s post on another of the group’s titles, the South Emsall and Hemsworth Express.

Rejected for military service for obvious reasons, he worked on several weekly and evening papers until 1943, when he secured an editorial job with the Daily Mirror’s northern office in Manchester. Later he moved to London to join Reuters news agency, first as a feature writer and then chief reporter. One of his tasks was to train messenger-boy-turned-junior reporter Derek Jameson, who later became editor of three national newspapers.

In 1947, Ronnie returned to the Mirror in London as a feature writer. He switched to writing about science as a reporter and was appointed as science editor in 1962. Ronnie’s skills – as reporter and pianist – were especially appreciated by Hugh Cudlipp, the Mirror group’s editorial director. He recognised Ronnie’s talent for explaining complex matters in a way that everyone could understand, and gave him free rein to travel the world to report on scientific and medical news.

Ronnie’s favourite subject was space exploration; he had signed photographs of many who had been up there. At the final press briefing before the 1969 Apollo launch from Cape Canaveral, Ronnie dared to ask the question that American journalists were too polite to ask: “Will the astronauts be carrying cyanide kits to the moon?” The silence was electrifying, but finally a flustered NASA official grudgingly replied: “No sir, the astronauts are not carrying suicide kits with them to the moon.” “Thank you,” said Ronnie. And that was the splash in the next day’s Mirror.

His other great passion was reporting on medicine. During the 1960s and 70s, heart transplants, IVF (test tube babies), corneal grafts, and polio vaccine were some of the big medical stories he covered. After something of a stormy start, he forged a lengthy and close relationship with the British Medical Association. Ronnie also helped to found the Medical Journalists’ Association which he chaired for three years. And in 1982, he was appointed OBE for his services to journalism. He retired from the Mirror in 1985.

Ronnie also fulfilled two ambitions – to play the piano in a brothel, and at the South Pole. He managed the first when the Mirror’s Paris correspondent Peter Stephens introduced Ronnie to Madame Claude, purveyor of courtesans to the rich and famous.

And he pulled off the other feat in Antarctica when members of the British Polar Expedition dragged a piano across the ice, complete with piano stool, for Ronnie to serenade them.

Ronnie married twice. He was amicably divorced from his first wife, Betty, who predeceased him. They had three daughters, two of whom, Helen and Joy are still living. He is also survived by his second wife, Thelma.