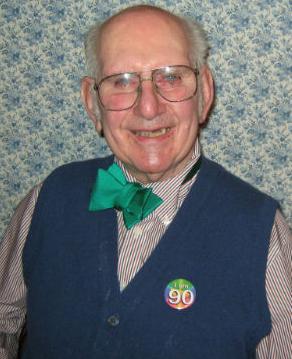 Peter became ill with pneumonia and died in Kingston Hospital exactly a month after his wife, Muriel, died fairly suddenly of a heart condition. They had been married for 68 years.

Peter, pictured on his 90th birthday, studied signwriting at art college and became a lettering artist working in London parks, as well as signwriting honours boards and war memorials.

As part of his work in the parks he did the lettering on the plinths of statues in an open air sculpture exhibition which formed part of the Festival of Britain.

Peter’s daughter Jenny Saville remembers a special man: “On the Sunday Mirror he – like all the other journalists – worked especially long hours on a Saturday night. He often told friends he said good morning to his work colleagues twice in the same day.

“He used to carry copies of the next day’s newspaper with him when he drove home in the early hours of Sunday morning, as he was sometimes stopped by the police. A free Sunday newspaper always smoothed his way home.

“One day he told me the art department secretary had looked at her horoscope which would be printed in that Sunday’s paper. “Oh dear, the prediction for my star sign is rather worrying”, she said. Whereupon my father swapped ‘her’ supposed future for that of another star sign with a better prediction.

In doing this he ruined her belief in horoscopes for ever, not quite what he had intended! He was, in fact, an extremely kind man.

“I should add that my Dad loved his work.”