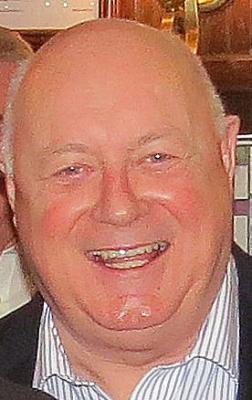 (The club is in the town centre so if you are driving you will need to use one of the NCP car parks. The limited car parking spaces outside the club will be under cover on the day and used as extra space for the wake and so no parking will be possible.)

His family want this to be a celebration of PD’s life and ask those attending not to wear black. Family flowers only, please, and donations to Help for Heroes (http://www.helpforheroes.org.uk/donate/)

Tribute from FRANK THORNE, (plus, below, obituary by ROY GREENSLADE)  Paul Davidson was a great father and husband, an honest, intelligent, loyal friend and one of the best journalists I ever met.

We first came across one another in August 1983 in the Chapel Inn pub in Coggeshall, Essex, when we were working on the story of missing woman Diane Jones, the wife of local GP Dr Jones.

Paul, who was born and grew up in Lincolnshire, was then chief reporter on the Colchester Gazette and I was an investigative reporter on the Sunday People. We took an instant liking to each other and joined forces against Fleet Street’s finest, whose newspapers had sent teams of their best reporters and photographers to follow up the suspicious disappearance of Mrs Jones. She had last been seen having a furious row with her husband, and falling off a stool in the bar of the Woolpack pub.

The elitist Daily boys looked down their noses at Paul because he was from the local paper. I could see they had made a big mistake.

That first week, with Paul’s help, his local Colchester contacts and collaboration, the People left the opposition for dead when we splashed on the exclusive revelation of a secret one-night-stand boyfriend of Mrs Jones, who had been beaten up at his flat when Dr Jones discovered his wife had enjoyed a three-in-a-bed romp with this man and his mate one drunken night. Paul knew I would find confirmation of the attack in the files of Essex Police. Splash and spread for me that week.

Our friendship was cemented. Paul became the closest friend and we the time of our lives on many big jobs and drinking up and down Fleet Street.

For example, when I saw News of the World executive Stuart Kutner looking around the Woolpack, I realised the Screws had bought an exclusive interview with Dr Jones. Paul and I hatched a plan to send one of the Colchester Gazette’s most attractive young female reporters to knock on Doctor Jones’s door. The doctor, a Welshman and then the number one suspect in the murder of Mrs Jones, was very taken with the fragrant and very gorgeous blonde Christine Twomey, secretly armed with my tape recorder, when he said the magic words: “I know what everyone is saying about me – I did not kill my wife.” Somehow Dr Jones thought Christine was from a local Welsh newspaper… another PD-inspired splash in the bag!

While Paul remained on the Colchester Gazette he and I pulled off a number of similar Page One exclusives for the People. One of the more memorable came about when Paul discovered from a pub landlord that Ipswich Town FA Cup winning hero Kevin Beattie was such a washed up drunk he couldn’t even get into the local pub team.

When we got to Kevin’s door in Ipswich, he explained he had already arranged to speak to the News of the World the following week – they were due to serialise his autobiography. It was a cold day… we needed to use his toilet… and a few hot cups of tea later, as Kevin replayed the video of his incredible Wembley goal-scoring win over and over, Paul and I got all the quotes we needed. Another PD Page One story to mark editor Richard Stott’s first week on the People. The fact that we turned over the Screws at the same time was an unexpected bonus.

Paul and I continued to have a number of collaborative successes and he began regular shifts at the paper. Stott admired him and I was so pleased when Paul was eventually given a full-time staff job.

Paul made headlines himself when he was slashed across the face in the Brixton riots in September 1985, when he and reporter Arnie Wilson were attacked by six or seven youths. Paul was very lucky not to lose an eye – he told me he believed it was because he blinked when he was hit on the forehead. In fact when he was so savagely attacked, Paul was actually trying to warn another People colleague, Roger Insall, that a fire had been lit under his car – Roger was inside it trying to move the vehicle. After that incident, Paul had a healthy fear of confined spaces.

We continued to meet for long, liquid lunches at his favourite wine bar, Davy’s, not far from the office in Holborn, even after I went to work for Richard Stott at the Mirror.

Eventually, as is the way of the world, Paul and I moved on from the Mirror Group at different times. After I moved to freelance in Australia, mainly for the UK papers, Paul was happy to tell me he would sub my stuff into the News of the World for a long time. He moved on to subbing at The Sun, in between some PR and other writing jobs.

One highlight of my many annual trips home from Oz over the years was to get together with Paul’s friends from various walks of life, including my former Mirror colleague Alastair McQueen, at Paul’s gentlemen’s drinking club, the North Countryman’s Club in the centre of Colchester. We would go on to have the best curry the town could offer, along with fine wine. Paul was affectionately known in the club as the Gin Monster.

I hope to raise a glass or three when I visit in June. Sadly, there will be a large space at the NCC bar, which nobody will be able to fill.

Tributes soon flowed in from colleagues and former colleagues of a journalist who made his mark as a reporter and a sub, as a mentor to younger journalists, and as a friend to many across Fleet Street.

As a reporter on the Sunday People, he was attacked while covering riots in Brixton in 1985. He was slashed across the head with a knife and, for a while, it was feared that he might lose his sight. Instead, he proudly bore a scar.

In fact, Davidson, always known as PD, had the looks and manner of a detective, which usually worked to his advantage. But former Sunday Mirror reporter Sandra White recalls that his entrance into the Wine Press on Fleet Street one evening prompted “a table of pop writers to run to the toilets to flush away their ‘recreationals’”.

His career began on his home-town newspaper, the Grantham Journal. He then moved on to the Colchester Gazette in Essex, becoming its chief reporter. The Daily Mail’s Richard Kay, who joined the Gazette straight from school in the mid-1970s, said Davidson “was very much a mentor figure to the young staff”. He writes:

“I remember Paul asked me why I wanted to be a journalist and I gave one of those awkward replies about putting the world to rights and being interested in people blah, blah, blah. ‘So,’ he said, ‘you’re a nosey bastard like the rest of us, then…’”

Davidson’s skills and confidence impressed Frank Thorne, then a Sunday People reporter, when they first met in 1983 while working on what became an infamous unsolved murder – the disappearance of Diane Jones, wife of a doctor in Coggeshall, Essex.

The case captured national headlines after she was reported missing by her husband some nine days after last being seen. Her body was found three months later.

“The elitist daily boys looked down their noses at Paul because he was from the local paper,” Thorne recalls, “but I could see they had made a big mistake.”

With Davidson’s help through his Colchester contacts, the People was able to splash on exclusive revelations about Mrs Jones’s secret private life.

A friendship was cemented and the pair later collaborated on other scoops, with Davidson soon landing regular reporting shifts at the People. “He was one of the best journalists I ever met,”says Thorne.

Dave Clark, who knew Davidson for 40 years, agreed. “As a reporter he was the bravest of the bunch,” he said. “Chasing villains and murder suspects around dockland pubs for the Colchester Evening Gazette, or unearthing big scandal for the People, he would knock on the doors others feared to approach.”

Davidson went on to report from Northern Ireland and, although it was rare for reporters to become subs, he made that switch by becoming a sub, first at the News of the World and later at The Sun.

Fellow sub James Anslow: “I can’t think of another example of a newspaper journalist switching from one discipline to the other with such ease and expertise”.

Clark, chief sub at the News of the World, said PD was a safe pair of hands as a sub-editor, able to “unravel the trickiest of tales and vividly retell them in exciting plain English” while being “a stickler for accuracy, grammar and deadlines”.

Although he left The Sun some years ago, he was rehired recently, quickly adapting to the demands of a new operating system and winning over new friends.

Sun editor David Dinsmore said: “Everyone will miss him dearly. This is a sad day for The Sun.” And the paper’s managing editor, Stig Abell, said: “Paul was a brilliant journalist and a lovely man – always full of ideas and fun. Life was never dull with him in the newsroom.”

Like many veteran journalists, he enjoyed a drink or two, and founded the North Countryman’s Club in Colchester, attracting many friends as members. Among them was former Daily Mirror reporter Alastair McQueen, one of his greatest admirers. Evidently, the club met on Friday to raise a glass to its departed founder.

Davidson’s wife Shirley, described him, in The Sun, as “a much-loved husband, father and grandfather”. The couple, who lived in Colchester, had four children. One of them, Aynsley, is also a journalist.