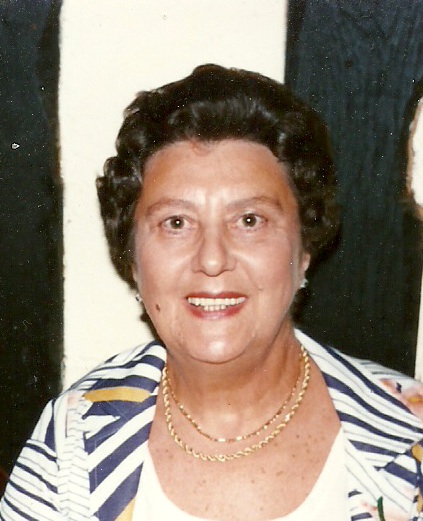 Former Mirror cashier PATRICIA MOBBS died last February (2016), and her husband ROY, who was also a Mirror cashier, sent these words of appreciation.

IN this year’s AMP spring newsletter there is an article about Mirror obituaries and the difficulties they sometimes present. Perhaps I can add to the coverage by telling you something about my late wife Patsy.

Maybe not many people will recall Pat, but I am sure she would be pleased to be remembered by colleagues from the old firm. She always talked with me about her time there.

This is my favourite picture of my Patsy, and I think she is young enough to be recognised by the people she worked with. It was taken at my niece’s wedding in 1987, so the glow could be from “Good Health” being toasted. Patsy was 60 then, and believe it or not, she never dyed her hair at all.

She was Patricia Tibbatts when she joined the Mirror, and she worked in the cashiers department as a comptometer operator, a job that no longer exists. There was a new computer system for processing the payroll, but the system was the wrong one. They did not have the right know-how in those days.

I was in the throws of a divorce at the time as we had to work overtime to get the payrolls out and my then wife had taken up golf – and with the local professional. She decided that he was more of a prospect than me, so…

Pat and I were both over the “Stab” (office pub) one night celebrating somebody’s birthday. We sat at the same table and got talking about things other than work. And I decided she was prettier than I had thought and she had a brain, and a sense of humour. I saw her home to her flat and it went on from there.

We married and were wed for 45 years before a massive stroke took her away from me in November 2014 – she was looked after in a nursing home after that until her death last February. I visited her every day.

But we had a wonderful life together. We weren’t blessed with children but we didn’t let that bother us. We toured the world on holiday, and she thoroughly enjoyed gardening, cooking, bridge, and, for 15 years before her stroke, organising speakers for a monthly meeting of an Active Retirement Group. I published its monthly newsletter and earned the title of Editor, of which I was quite proud.

I am still in contact with a couple of workmates from the Mirror and received their condolences on Patsy’s passing. Also I was pleasantly surprised to receive a card from Caro Cluskey, and on behalf of the AMP. She must have had notice from the pensions office about Pat.

Pat left the Mirror shortly after we were wed, and became a pensioner when she reached the age.   I have been a pensioner since 1975 due to ill-health retirement. I feel a bit of a fraud as the medicines have been keeping me sane for a long time.

I am so pleased to be in touch with people from the old days.
**If you are an ex-colleague or friend of Roy’s and have lost touch, please add your details to a Contact Us form and we will pass them on to Roy.