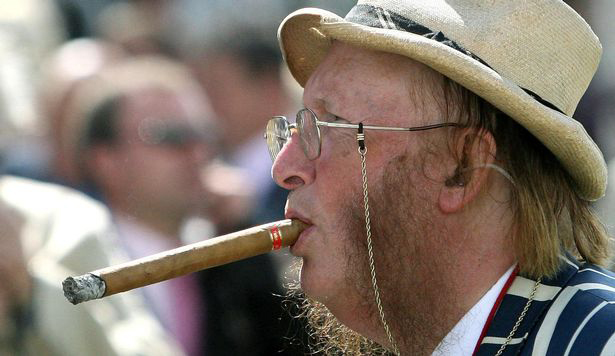 Many moons ago, on the distant planet that was The Sporting Life, I took a phone call on the morning following the death of our then coursing correspondent –  hare coursing was legal in those days.

It was Big Mac (as he later became known.) He didn’t exactly say “Gissa job”, but almost. It took he and I a while to grow mutual respect, but in the end it worked OK. He told me one particular journalistic award he won was due in part to the Life’s comprehensive cuttings library, which I meticulously supervised.

His later public image was for the main chance, but in those early days on the Life he was always unfailingly polite, and generous in his appreciation.

HERE’S what Mike Cattermole wrote, 05/07/19: Although we all knew John McCririck was seriously ill, his passing this week was accompanied with a great sadness.

Eccentric, no doubt, and complex too, Mac had a presence and aura about him. When I joined the C4 Racing team in 1999, I didn’t really know what to expect from him as a colleague. However, it soon became apparent that, far from it being all about him, he was very much a team player, fun to be around and never afraid to have a laugh at his own expense. It was never dull.

There were at least two versions of Mac, the most well known were the loud one on the telly and the quieter but diligent man away from the cameras. There was another very private man at home, hence his desire to keep the seriousness of his fatal illness hidden. All he told me was that he had had an infection but admitted that he wasn’t going to get better. He never once complained about it.

Back at around turn of the century, he was in his pomp. Champion of the punter, he made the betting ring – ‘the jungle’ he called it – his kingdom. I admired him for his deep professionalism – he was always first into the racecourse, making copious notes on his racecard with statistics going back decades, ready to call on for the afternoon’s broadcast. Those racecards became temporary encyclopaedias of facts; no man was ever better prepared for a broadcast.

He loved an on-air debate and we had plenty of those, especially on The Morning Line where, on one occasion, having grown increasingly frustrated with my holding a polar opposite view (on something long-forgotten), he referred to me as “brain dead”! [Surely not? Ed.]

I didn’t mind, and he certainly meant no offence, but our producer Andrew Franklin was on talkback immediately and demanded a swift apology, which, of course I got. Mac’s massive personality was very skilfully managed by Andrew – Mac called him “boss-man” right to the very end.

Mac cared deeply about the output we were creating and if he had a good stat or line but it wasn’t his turn to speak, he would encourage you to say it. He wanted everybody to do well. I promise you, this is rare in broadcasting. He was always full of advice and was proud of the chemistry that the team had.

He was the go-to man for any betting or racing politics story, never missed a trick, and was a prodigious reader of newspapers, always taking cuttings and sending them on to you if he felt they might be of interest.

The paper review on The Morning Line was right up Mac’s street, allowing him to indulge in all sorts of stuff – especially politics and many funny stories, as well as who was tipping what and why. It was incredibly well researched and, if we were broadcasting from a metropolitan track, his wife Jenny would drive down in the small hours from their home at Primrose Hill to King’s Cross to get copies of the early editions so that Mac would be up to speed by the time we were on air at breakfast time.

Yes, Mac was a male chauvinist (you don’t say!) but his mischievous side encouraged meant he more than played up to that image. He would fuss at Jenny to do this and do that. But if she felt he was going over the top, she would tell him to shut up – and, much to our amusement, he immediately did! Ultimately I felt ‘The Booby’ wore the trousers.

When he wasn’t unduly busy, he never turned down a photo opportunity with a fan – cue the raised arms and open-mouthed pose – which would always end with him saying: “No children should ever see that picture.”

He was a big man for charities, too. He loved animals, retired greyhounds and horses especially, and did not want it known that a decent percentage of his chunky fee for Big Brother was given to Greatwood [Greatwood uses former racehorses to educate disadvantaged children and young adults with Special Educational Needs (SEN)].

Mac’s prowess as an award-winning investigative journalist showed that he knew right from wrong, and that was later to manifest itself in his own career when he lost his job in unfortunate circumstances on C4 Racing. The transfer from Highflyer Productions to IMG and the change of personnel was poorly handled by C4 and Mac took it especially badly.

In truth he never really got over it, and salt was rubbed in the wound when he unsuccessfully sued on ageism grounds in 2013. It cost him many thousands of pounds and it was hard not to feel sorry for him.

I felt he had been badly advised. He should have gone for ‘unfair dismissal’ or something similar. C4, after all, were more than happy to pitch him into certain TV shows, such as Big Brother or Wife Swap, precisely because of his on-screen colourful and controversial persona. C4 never thought about consulting him about changing his technique regarding the racing coverage and that hurt him.

Mind you, could he have done it? Big Mac would not have been Big Mac. Times were changing and he was also gradually eased out by At The Races, and in recent years cut a slightly pitiful figure when attending the races without, presumably, being paid to do so. But he just loved his racing and especially the big days.

I would talk to Mac on the phone and say there were not many personalities who had enjoyed three decades at the top on television, but it didn’t seem to console him. Jenny, too, was shaken by the C4 fallout. As very much the other half of the Big Mac ‘brand’, she did more than just look after him. She was always by his side and acted as wife, driver, housekeeper, secretary, agent, you name it. Married for 48 years, both were only children and, after their parents had died, had only one another.

Now that Mac is gone, the biggest void will be left in Jenny’s life and I hope and trust that their friends will continue to keep a close eye on her. Mac hated birthdays and Christmas. He didn’t want a funeral, certainly not a memorial service, and his ashes will be scattered on the site of the old Alexandra Palace – Ally Pally – racecourse. And that, as they say, will be that.

He was someone so very different but I will recall him with great affection and, one thing’s for sure, we will never forget him.

Pic: Thanks to Daily Mirror