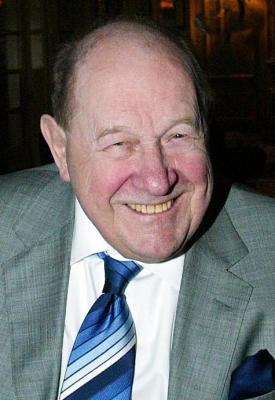 John was surely one of the legends of Fleet Street.

Generally shunning the limelight, he was not a high-profile figure in the way of an editor or columnist, but he nevertheless embodied the integrity and innovative style that endeared the Daily Mirror to its millions of readers during the 30 years that he orchestrated promotions and publicity for it and its sister titles, the Sunday Mirror, Sunday People, Reveille and The Sporting Life.

“JJ”, as John was affectionately known, will be remembered by his former staff and associates throughout the industry as even-handed, loyal and intensely protective of those for whom he was responsible – one of the few whose word and commitment could be trusted utterly.

After a brief flirtation with a theatrical career, John Jenkinson joined the Daily Mirror in Manchester in 1958 as assistant to publicity manager Donald Robery. At that time the Mirror Group was developing its northern publishing activities from Withey Grove, and John’s first assignment was to compere the Mirror Girl contest that toured holiday resorts during the summer months.

Robery, a retired army major, was quick to spot John’s instinctive grasp of the newspaper world, and in 1960 John took over northern publicity. He came to London in 1961 to run the Sunday Mirror National Exhibition of Children’s Art – and to organise the programme for the opening of the prestigious Mirror Group Newspapers headquarters at Holborn Circus.

It was the heyday of the Mirror – and indeed of Fleet Street. The Daily Mirror steadily climbed to five million daily sales – driven by a succession of ground-breaking events such as the Boom City promotions, the National Youth Orchestra, the National Pets Club, Blackpool Week, the Debutante’s Ball, and the launch of the iconic Mirror Dinghy, all designed to tap-in to the enthusiasm of its growing family of readers.

As the Mirror caught the spirit of the sixties these imaginative projects demonstrated the seamless organisation and attention to detail that were to become the hallmark of John’s style, and as the 1970s unfolded his expertise was especially tested by the demand for ever more ambitious in-paper competitions, offering prizes from cars to luxury holidays and even homes.

One landmark promotion offered 100 readers a day trip to America on a specially chartered Concorde – a one-off excursion that has never been repeated. This was a typically bold stroke to steal the march on the other nationals, vying to capitalise on the magic of this charismatic British institution.

Perhaps the ultimate test of John’s calibre came with the introduction of newspaper bingo, when the smallest error could potentially have spectacularly disastrous consequences. Under John’s tirelessly watchful eye, Mirror Group titles were alone in never to coming to grief – and in 1985 came the crowning achievement of the Who Dares Wins competition, offering readers a £1 million cash prize.

John Jenkinson was born and brought up in south London, where he met his wife Lillian (Zoë to all who knew her) at a theatrical club.

In his 34-year career with Mirror Group, his reputation for dependability and the delivery of the demanding requirements of editors, often to near-impossible deadlines, was matched by an equally enthusiastic capacity for journalism’s other performance art. But however late the night (or early the morning!) he was always on duty on time – immaculate in yet another well-tailored suit.

A tireless networker, John never forgot a face or a name, and even in the most testing circumstances his sensitive touch and diplomacy could defuse a difficult situation. His judgment and experience were valued by more than 20 editors with whom he worked – and not forgetting the three publishing titans: Cecil King, Hugh Cudlipp and Robert Maxwell.

It is probably true to say that John was one of the few whom Maxwell truly respected, which must in large measure have been because Cap’n Bob sensed that here was someone who could not be bought or deflected from his principles.

Even a roll of such achievement spanning the glory days of Fleet Street cannot quite define the quality of the man. There are many among us who have cause to remember John for acts of kindness and generosity, for his instinctive understanding of problems and the discreet way in which he so often squared the circle to make things happen.

So perhaps his legacy lies in that he embodied the very heart of the relationship between the Daily Mirror and its readers, in an era that is now itself history. While John’s passing leaves each of us with a deep sense of loss, it also offers uplifting memories of what fun it all was.

**At this time our thoughts are with John’s “other family”, especially his brother Michael and wife Diane – and also with his young neighbours who provided regular daily contact and companionship.