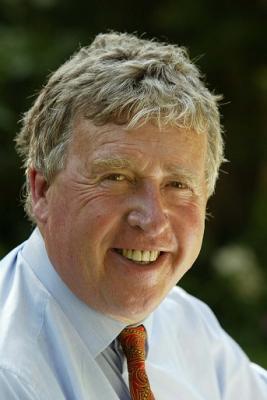 His biggest exclusive was his revelation Diana suffered from eating disorder bulimia.

He was also the first to report she was dating Dodi Fayed, son of then Harrods owner Mohammed.

Cheltenham-born James started work in an accountancy firm. He then spent four years on a local paper in Brentford, West London, before moving on to a career in Fleet Street.

He also worked for the Daily Mail, the Express, The Sun and The Star.

It was during a skiing trip that Diana dubbed him the Big Red Tomato after spotting his large frame in a brightly-coloured one-piece ski suit.

His son Thomas, a former showbiz reporter, said: “He was so ill at the end with kidney and lung failure from the chemotherapy — a ventilator kept him alive.

“Two months ago he was invited to Buckingham Palace to meet The Queen. He was so proud when he shook her hand.”

Mirror editor Richard Wallace said: “He was a true Fleet Street legend who became famous around the world as a royal reporter.

“His colleagues often joked that at times he appeared grander than the royals themselves — which, of course, he loved.”

GARTH Gibbs, below, one of the most colourful characters of the old Fleet Street, died in August, 2011, aged 75, after a long battle with cancer.

South African Garth came to London in the 60s, having worked on the Rand Daily Mail. He was a tall, handsome young hack whose silver tongue opened the doors of dukes and dustmen alike.

His first jobs in London were on the Evening News and at Reuters, but his charm led him to the Mirror, where he established himself as a go-anywhere, do-anything reporter for more than 20 years.

He covered the royals for a while, and his “cheeky chappie” demeanour was said to have amused the Windsors.
He then specialised (if that’s the word for it) in the Miss World contest and would invariably tip the winner, much to the despair of Ladbrokes.

Later he had his own daily page, Gibbs Gossip, which allowed him to exploit the contacts made thanks to his easy manner.

He is survived by his third wife Louise Montgomery, his four children, Garry, Warren, Russell and Juliet, and stepdaughter Daskar.

By BRIAN RIMMER and REVEL BARKER