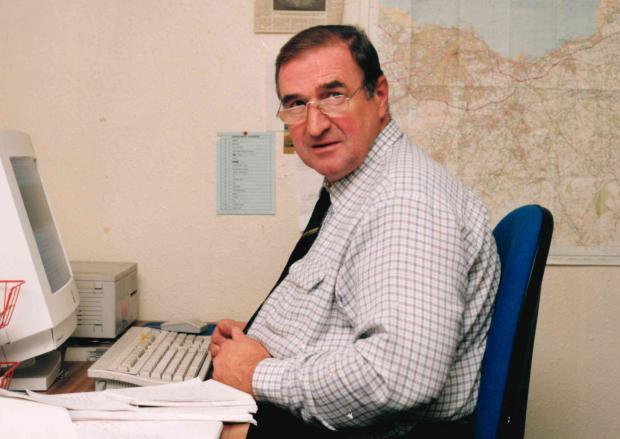 IAN’S colleague and AMP committee man MALCOLM SPEED writes: “Ian was gregarious and a real character, a top reporter who fitted in everywhere. ‘Metters’ was was also known as ‘Scoop’ – an acknowledgement of his ability as a reporter. He will be sadly missed by colleagues across many newspapers. He had also worked for the Scottish Daily Express during the golden age.

“When he retired he was deputy editor of the East Lothian Courier. He loved shooting, sailing and horse riding, and during the Courier’s 150-year celebrations in 2009, he recalled: ‘I went to Macmerry to cover a particularly brutal axe murder on a Saturday – clad in my plus-twos and deerstalker hat on the morning of a shoot. ‘I’m from the Courier,’ I announced on one doorstep. ‘Aye. I didnae think you were fa’ the News of the World,’ came the laconic response.’

“On the die-hard, Labour-supporting Daily Record, Metters loved a sundowner in the oft-frequented Haddington Conservative Club.”

You can read a full obituary on the East Lothian Courier’s website, which also provided the photo: https://www.eastlothiancourier.com

Courier editor Robbie Scott, who worked with Ian until he retired, said: “Ian was a larger-than-life friendly character who devoted his life to journalism. Many years in the national press taught him all he needed to know about the profession, and it showed the measure of the man that, at the end of his career, he chose to return to the Courier to gently pass on his wisdom to new generations of reporters while still holding those in power to account. There is unlikely to be a journalist quite like Ian in Haddington ever again.”

Ken Laird, former Edinburgh office bureau chief, assistant editor on the Record, and Maxwell press officer, sent  this: “Another reporter of the old school gone, with the passing of the irrepressible Metters. I recall the time when people had been stranded on Cramond Island, and Ian left an overnight note to the effect he hailed a passing yacht [for a lift to the island in the Firth of Forth] to get the story.

“When some lads were in Edinburgh from Newtongrange during the miners’ strike, I took them for a few pints to the Gordon Arms on Rose Street. Talking about the hardships they faced at the time, Metters responded: ‘Tight for cash? I know the feeling. The price of hay to feed the nags is going through the roof!’ The story is till quoted in Newtongrange almost 40 years later.

“He did, though, write some good pieces for the Record during the strike, one of which had the opening sentence: ‘Even the dogs in Newtongrange are thinner.’

“A good all-round reporter, his parting shot on finishing a day shift was: ‘Cheers and cheers, I’ll be in the Conservative Club [Haddington] if anyone needs me.’  That is if he didn’t go to the Gordon Arms, or the Rose and Crown, or the Victoria and Albert, or the Queens Arms or The Blythe Spirit or The Auld Hundred first!