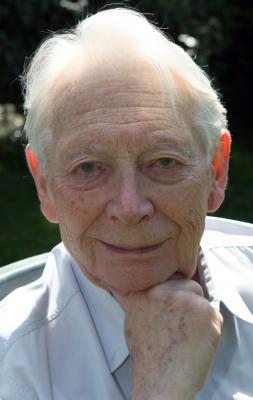 “The Voice of the Mirror: Daily Mirror veteran Geoffrey Goodman combined humanity with the soundest judgment to be one of the finest journalists of his or any other generation.
A bright light went out in the country with the passing of an extraordinary man who was the personification of so much that was good.”
By Kevin Maguire, Daily Mirror

Geoffrey Goodman was one of the Britain’s most respected newsmen, earning huge respect for his coverage of the turbulent industrial and political upheaval of the 1960s and 1970s.

He was a staunch trade unionist, lifelong socialist, fantastic journalist and the most decent, generous, wise man you could ever hope to meet.

I grew up reading his Mirror columns about the battles for higher pay and better jobs, inspired by the persuasive voice he gave working people ignored or belittled by much of the media.

Later I was privileged to get to know the warm, humane figure greatly admired by the people he wrote for as well as those he chronicled. Often over lunch in the Gay Hussar, a famous Leftish restaurant in London’s Soho where Goodman was at home.

He and wife Margit, who arrived in Britain on the last Kindertransport train bringing Jewish children to safety before Hitler occupied the European mainland and unleashed the horror of the Holocaust, held a joint 180th birthday in the renowned eaterie.

The great and the good of the labour movement paid homage to Geoffrey, including Neil Kinnock and ex No 10 spinner Alastair Campbell. And today Neil and Glenys Kinnock released a statement in tribute to their friend. “Throughout his long life, Geoffrey Goodman always lived up to his name.
“He was the warm, strong soul of socialism – gentle and generous in spirit and deed, resolute and dedicated in his beliefs and his work.
“He was a friend and comrade to value – and a great source of stories and fun.
“Geoff was an unsurpassed professional as a journalist, trusted throughout the Labour and Trade Union Movement and respected even by his enemies.
“He was brave in war and in peace, and he never failed to stand up for justice and freedom.
“We will miss him greatly and we send our deepest sympathy to his beloved Margit and their family.”
Former Prime Minister Gordon Brown also recalled him, saying: “Geoffrey was a great writer, a good friend and a wonderfully humane person with a burning lifelong passion for justice.
“He never stopped believing that we should work together for a better world.”
And Leader of the Labour Party Ed Miliband said: “I’m sad to hear of the death of Geoffrey Goodman.
“Geoffrey was one of the leading political and industrial journalists of his generation, an impressive biographer, writer and a true public servant in his almost 20 years at the Mirror.
“I send my and the whole Labour Party’s condolences to Geoffrey’s family.
“He will be remembered with great affection and missed by his friends, family, former colleagues and all those who knew him, as well as everyone who read and enjoyed his work.”
By Peter Willis, (Mirror weekday editor.) “Geoffrey Goodman was a giant among journalists and one of the greatest ever Mirrormen.
“Geoffrey was unsurpassed at getting to the heart of the major industrial and political issues when the country was experiencing massive upheaval.
“He was hugely respected by his peers, those in the corridors of power and, most importantly, our readers, to whom he spoke with passion, wisdom and integrity.
“His tremendous contribution to our profession were justly recognised with a CBE.”

Born into a family struggling to stay afloat financially after his dad lost a job in a cardboard box factory, the wartime RAF Flight Lieutenant in Bomber Command was to became a confidante of socialist hero and NHS creator Nye Bevan.
He was a close friend of Michael Foot, devastated when the onetime Labour leader passed away.
Harold Wilson persuaded Goodman to put the top on his pen to spend a spell as an adviser in Downing Street’s anti-inflation unit and a peerage was there for the taking.
But Goodman was loyal to journalism and the Daily Mirror, returning to the paper until retirement as an Assistant Editor in 1986 after the agony of the year-long miners’s strike.
As Industrial Editor of a paper he joined in 1969 following spells on, among other titles, the Daily Herald and Manchester Guardian, both sides in titanic disputes trusted Goodman.
With accuracy and passion, he explained why disputes happened when others automatically pilloried workers and gave bad bosses a free ride.
TUC general secretary, Frances O’Grady, said: “This is very sad news. Geoffrey was the greatest industrial journalist of his generation, a fine biographer and wise counsel to succeeding generations of TUC leaders. He will be missed by many not just for his wisdom but as what his generation would have called a proper gent.”

Brendan Barber, O’Grady’s predecessor at the TUC, said: “Geoffrey was always a loyal and generous friend to me personally and a source of wise counsel.”
Ray Collins, a former Labour Party general secretary, called Goodman “a journalist of compassion and integrity who always ensured the voice of the working class was heard.”
Labour MP Peter Hain, an ex-Cabinet Minister, hailed a “socialist, journalist of high quality, decency and integrity”, recognising Goodman’s love of the Labour magazine Tribune which was his second home after the Mirror.
Owen Smith, a member of Ed Miliband’s Shadow Cabinet, paid tribute to “a great journalist and a great man of the left who kept Nye’s flame burning.”
The BBC’s Andrew Marr once described Goodman as “one of the great gents of post-war British journalism”.
Born in Stockport in 1922, Goodman was a non-religious Jew.
His son last night revealed that his father added a year to his age to join the RAF, claiming he came into this world in 1921.
After the war, Goodman stuck with 1921, celebrating landmarks such as his 90th birthday a year early. Confused friends believed he had died at 92 rather than 91.
His family moved to London when his dad lost his cardboard box factory job so he could be a door-to-door salesman.
He once recalled the poverty and slum housing. The family would watch in horror as the wallpaper moved as insects crawled between it and the wall.
He rarely talked publicly about his exploits in Bomber Command but did not accept criticism of Arthur “Bomber” Harris, the RAF chief behind attacks on German cities. Harris made mistakes, he accepted, but it was a war we had to win and carpet bombing was part of it.
Goodman is survived by Margit, their son John and daughter Karen. One of his slight regrets in later life was not becoming a Labour MP; a seat in Leicester was dangled before the scribbler.
During lunch in the Gay Hussar in early summer Goodman’s take on politics was as penetrative as you’d hear anywhere.

RIP Geoffrey Goodman, a modest man who had nothing to be modest about. He was a model for generations:
Geoffrey was the best kind of journalist, devoted to getting the story and telling readers what was going on in the world of industry, politics and government.
But he was also a doughty fighter for working people and a true friend of the trade union movement with an unrivalled set of contacts.
He was a model for generations of industrial correspondents – like me – who grew up in Fleet Street under his very considerable shadow.
Geoffrey’s passing breaks one of the last links with the post-war heyday of Attlee, Nye Bevan and Ernie Bevin.
He knew them all and they respected him. And so did we.