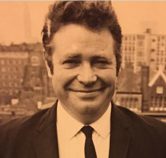 Never an ace newshound – especially if it meant missing lunch – his ease with words and ability to craft a perfect few paragraphs out of very little helped him progress quickly to Fleet Street. There he wrote gossip columns for the Daily Sketch, Daily Herald and Sunday People.

As a diarist, he often had an invitation to a lunch-time product launch or a film screening to share, which always involved eating and drinking. This did his already generous waistline no good at all but made him very popular with his colleagues.

Frank met his first wife Barbara, also a journalist, at a Labour Party conference. They had a son, Mick, and daughter Sarah. The couple later split but during the early 1980s he met and married Greta.

He contributed to several trade magazines and tried, unsuccessfully, to write film and television scripts with Hilary Kingsley, who’d been his usual lunch companion on The People.

Frank’s family adored him for his gentleness and wit, his expansive knowledge on so many topics and his brilliance with quizzes. They treasure the poems he wrote for them, and always for Greta on birthdays and anniversaries.

He lived with a failing heart until his 89th birthday, just long enough to be wrong about Donald Trump’s chances of winning the presidency, his mind razor sharp and wry to the end.