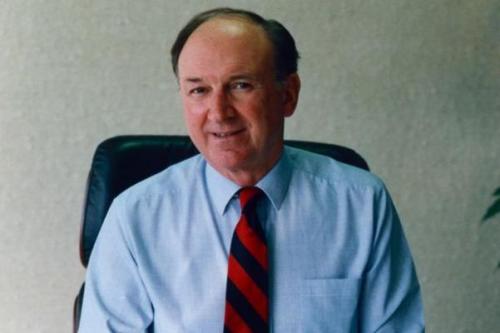 TOM BROWN writes: “Save our Scottish mince” may not be the most intellectual slogan ever coined – but it showed Endell Laird’s canny understanding of the mass Scottish readership.

When the EU threatened to ban Scotland’s staple meal of mince-and-tatties on hygiene grounds, he threw the Daily Record into another successful campaign.

The same understanding led to the Record raising what was believed to be the greatest-ever sum by a newspaper anywhere in the world – £4 million for the first Scottish children’s hospice. When fellow-executives queried the amount, he declared: “Record readers will give as much as that cause needs.”

Previously, when he was editor of the Sunday Mail, the paper had pledged to raise £300,000 for units in Glasgow for young patients in need of bone-marrow transplants. In fact, double that amount was raised.

Many were surprised that he did not receive recognition in any honours list for his papers’ campaigns for charity and Scottish interests. It was believed that the Robert Maxwell connection (he was on the Maxwell board of directors) counted against him.

His gut feeling for what his readers wanted was responsible for the Daily Record and Sunday Mail sustaining their domination of the market north of the border. Under his editorship, the Sunday Mail sold 900,000 copies and the Daily Record three-quarters of a million, with both papers campaigning on issues of social justice and Scottish life, notably including Save Ravenscraig steel mill, Rosyth dockyard, consumer affairs and child abuse.

Born and educated in Forfar, Angus, Endell’s early years in journalism were spent on the Dundee Courier, Scottish Daily Express and Evening Times.

When asked what he thought his achievements were, he summed up his career: “Maintaining standards and ethics on popular papers, while closely identifying with a national readership – as well as their pride in being associated with charitable causes.”

Malcolm Speed, (Daily Record News Editor 1983-94; Managing Editor SDR&SM Ltd 1994-2006) said: “Endell had his finger on the pulse of what Scottish readers’ wanted. This was during the Maxwell era and he turned down the Captain’s summons to edit in London…. and survived. In the never-ending argument about who was the best editor. Endell with his huge circulation success will always be difficult to argue against.”