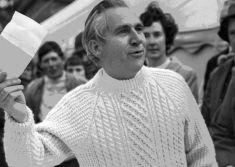 TOM BROWN writes:
Derek Webster, who died aged 87 on December 28 (2013), edited the Scottish Daily Record when it won the accolades “The paper that showed the rest of the world the way” and “coloured the world’s newspapers”.

He will also be remembered for contesting Robert Maxwell’s treatment of the company’s pensioners and demanding to know why non-executive directors failed to challenge “the rampaging, plundering Maxwell”.

One of the directors he attacked later admitted: “Before Maxwell’s death, Mr Webster was a bonnie fechter for a larger annual increase for Mirror Group Newspapers’ pensioners, and some improvement was achieved.”

An edited version of an article from www.thedrum.com by Noel Young: DEREK WEBSTER, under whose editorship the Scottish Daily Record became the world leader in newspaper technology, bringing full colour to the world’s newspapers, died from a heart attack at his home in Glasgow in December.

Derek, who retired as chairman of the Daily Record and Sunday Mail shortly after Robert Maxwell took over in 1984, was 87.

Born in Margate, Derek, a former Daily Mirror chief sub in London and later northern editor in Manchester, was appointed editor of the Record in 1967. He had also worked for the Mirror group in Africa.

In Glasgow, he brought a new design-led slickness to the Record, then battling to overtake the 600,000 selling Scottish Daily Express.

I had met Derek when I was a trialist sub-editor at the Daily Mirror in 1963. The Mirror was a 5m-selling newspaper, but there was little hint of drama on the editorial floor at Holborn Circus. Chief sub Derek worked quietly away with Larry Lamb at his side and Geoff Pinnington on the back bench. Gaitskell dead? That was the big story one night. You’ve no idea how smoothly the Mirror changed gear.

The Mirror was later to “let me go” (surprise!) and I went to work on the Sketch before returning to the Record in Glasgow. There, as the one of the few Scots who had worked with Derek, I was able to reassure my colleagues in 1967 about the high credentials of the man who was to be their new boss. But even I had no idea what was in store.

The Record was then being produced in hot metal with clapped-out presses at its old HQ, 67 Hope Street in Glasgow. Much more was needed to crunch the Express. The Mirror management boldly decided to replace the lot with a brand new printing plant at Anderston Quay with full colour web-offset printing and computer typesetting.

Cynics scoffed that a print run in excess of 700,000 was far larger than had ever been contemplated before with web offset. But with Fleet Street still bedevilled by union restrictions, the Scots workforce moved to full colour, along with computer typesetting (punched tapes used to produce bromides for news page paste-ups).

The success at the Record is said to have inspired Robert Maxwell to move the Mirror itself into colour well before The Sun.

Derek was appointed editor-in-chief of both the Daily Record and Sunday Mail later that year and the titles became Scotland’s best-selling daily and Sunday newspapers, with all-time high circulations eventually reaching over 5.5m copies in the seven days of publication.

Derek later became chairman of Mirror Group Newspapers in Scotland and joint chairman of the Press Council. He received a CBE for services to journalism in the early eighties.

Derek is survived by his wife Dorothy, a journalist he met in Manchester, and their three children Andrew, Nick, and Susie, all in the media business.

Derek’s funeral is at 11am on 7 January at Clydebank crematorium.