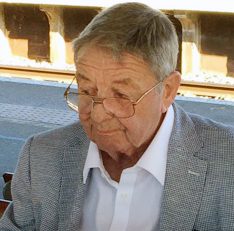 VETERAN Mirror journalist DAVID “DAI” DAVIES, who died last November, aged 78, was a self-effacing top-table news sub for 25 years, during which time he handled some of the biggest stories of the day.

Welshman Dai, who joined the subs after moving from the Daily Express in Manchester in April 1970, was an astonishingly fast operator, yet one who never sacrificed accuracy for delivering the copy on time however great the pressure. He always rose to the occasion, never more impressively than in the 1987 Herald of Free Enterprise disaster.

In one of the biggest stories of decade, the Channel ferry sank off Zeebrugge shortly after 6pm with the loss of 197 lives. This was a classic running story with information constantly flooding in as the minutes ticked away to the first edition going off stone. In a typically bravura performance, Dai handled mountains of copy to produce a lengthy splash and spread, then stayed with the story, constantly updating for further editions, until the early hours.

Dai, ever unflappable and good-humoured, was a production journalist of immense versatility being as adept at page design as he was at the craft of subbing. For many years, his Saturdays were spent chief subbing The Observer, a job which called for significantly different skills than subbing for a tabloid. As ever, he rose to the occasion.

In his spare time he produced a number of house publications, including British Airways’ weekly staff newspaper. Mirror Group also asked him to organise the nightly production of a column of hard news nibs for the broadsheet Sporting Life, an innovation that was greeted with unexpected success.

Although most of his professional life was spent in hot metal, Dai was among the first swiftly to adapt to the new realities of the computer age. In his own quiet way he was proud of his ability to turn his hand to anything that was required of him. It was this talent that made him such a valuable member of the subbing team and a rock of reliability for the many chief subs he worked for over the years.

On his retirement Dai continued working on house newspapers and magazines, expanding his base of clients. He enjoyed travelling, particularly to Australia where he visited family. Until a few years before his death, he regularly travelled from his home in Epsom to attend Mirror subs’ reunions at Canary Wharf, where he briefly worked after the move from Holborn.

From Ruth Lewis: I just wanted to pass along my thanks for the wonderful words that Pat Welland wrote about my father David Davies. I was so touched to read them, as was my sister Rebecca.

Rebecca and I were immensely proud of Dad and the work that he did. He always spoke of the friends he made during his career with great fondness and always had great newsroom stories to tell. He obviously loved what he did.

I remember the night of the Zeebrugge disaster very clearly – I would have been 17 at the time – and Dad telling me of that night’s work.

I know a few of the guys will remember the night I was born in August 1970. I think Dad was at the Press Club when the call came in to say Mum had gone into labour, and there was quite a bit of panic in the newsroom until he was located.

Anyway, thanks ever so much, Pat, you summed up Dad perfectly. He was a wonderful father, Rebecca and I adored him, as he us, and we miss him very much. He was a most lovely grandfather, too.