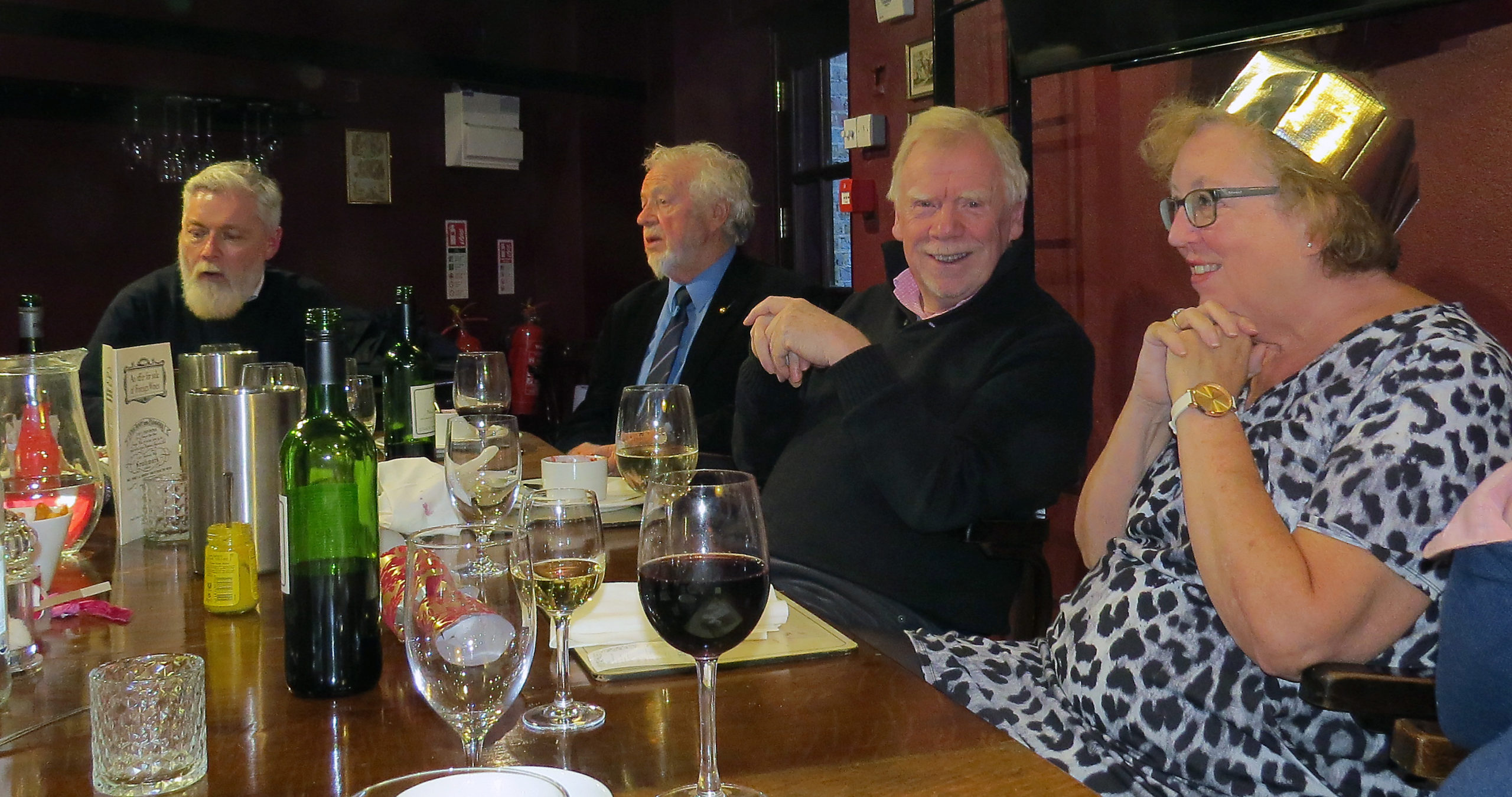 RECOLLECTIONS of what might have been overflowed when a band of retired Fleet Street names reunited at the historic Boot and Flogger in London’s Southwark to celebrate the long lunch, and take a walk down Memory Lane fuelled by five-star food and fine wine.

Many old Fleet Street hands will remember Barrie, and his wonderful late wife, Pat. They worked half the year from Marbella in southern Spain in the days when James Hunt was Formula One World Champion; Barrie’s friend Ronnie Knight – actress Barbara Windsor’s ex – was Scotland Yard’s Most Wanted on the Costa del Crime; and a teenage Mandy Smith was [allegedly] having under-age sex with Rolling Stones’ Bill Wyman. All big stories which Barrie and Pat covered as world exclusives.

For the record, our lunch gig began about 1 o’clock and finally wrapped up at 8pm, so the last men and women standing could catch their trains home. As MC and organiser, I can tell you this epic lunch was full of great stories – some well known and some virgin. As thoughts turned to the good old, bad old days, our lunchers recounted various tales of what might have been – what woulda, coulda, shoulda been…

Former Sunday Mirror scribe Sandra White recalled a fashion shoot when she was on the Daily Star many years ago, when a very awkward up-and-coming celebrity went through racks of clothing in the studio, throwing things on the floor, refusing to wear them and exclaiming: “This is sh*t, sh*t, sh*t” about each outfit.

Finally, photographer Mark Bourdillon was forced simply to photograph this showbiz prima donna in her own clothes. Said Sandra: “When we took Mark’s photographs to the fashion editor, she said of the subject: ‘She’s a dog’ and threw the pix straight in the bin. It was Madonna!” Gales of laughter round our lunch table.

Following Sandra’s revelation about Madonna being binned, the conversation turned to other exclusives that woulda coulda shoulda been…

David Hancock told how he met with an up-and-coming young boy band and got on like a house on fire. The band begged him to get them publicity in the Daily Mirror. Said David: “They were totally unknown at the time and agreed that if I got them in the Mirror, when they made it, they would give all their exclusives only to the Mirror.

“When I took the piece to Roger Collier, the then Mirror features editor, he said: ‘Never heard of them – I don’t think so…'” The band was Take That. The rest, as they say, is history. David’s last word on the subject: “Take That would never give the Mirror an interview after that.” Collier’s decision at that time may have seemed criminal to the Mirror’s showbiz man.

Brendan Monks regaled us with his own heartbreaker. He and Sunday People showbiz reporter Tony Purnell travelled to snowy Switzerland to do a feature on the world famous Jackson Five. The stand-out during the interview and pictures was Brendan’s capture of a young Michael Jackson sitting in the arms of a giant snowman. Jacko had a parallel solo career by then, but was not that popular in the UK outside of the Five. This was before he discovered cosmetic surgery, turned a deathly shade of pale and became Wacko Jacko.

An excited team of Monks and Purnell went to Sunday People assistant editor Alan Hobday, a hard-to-please, old-fashioned Northerner. When they explained that Michael Jackson was a brilliant young performer and singer who would be “absolutely huge” worldwide with his upcoming solo albums, an underwhelmed Hobday, who’d never heard of Jacko, retorted: “Says you!” – and promptly binned the feature, and the pic. That’s showbiz, as they say.

Speaking of the Sunday People, I remember David Montgomery, at one time the paper’s number 3, saying of some ideas put up at conference by news editor David Farr: “Any more stories like that and I’ll have to get a bigger dustbin!”

At our lunch as the afternoon wore on and the wine flowed, the talk turned to Prince Andrew’s questionable friendship with paedophile Jeffrey Epstein. Annette Witheridge and Sandra White both claimed inside knowledge and promised there is much more scandal to come.

The good old bad old days were picked over until we called Last Orders. One of the best Fleet Street long lunches in quite some time.

Frank adds: My own near miss was soon after I joined the Daily Express, aged 24, and I was manning the news desk solo on the “dog watch” overnight. Two Met police detectives rang in from a phone box looking for an exclusive payment. They told me they were at a murder scene in Belgravia and that Lord Lucan was wanted for killing the family nanny. They added that Lucan had called his mother, the Dowager Lady Lucan, while police were with her but he had declined to speak to them, saying he would appear at the local police station the next day with his solicitor. Lucan was never seen again.

The late-night sub editor, Ray, climbed over the library shutter to get out Debrett’s Peerage [the reference guide to the United Kingdom’s titled families]. When we looked up the Earl of Lucan, we learned that one of his great, great ancestors had ordered the ill-fated Charge of the Light Brigade. We had ourselves a genuine Fleet Street scoop.

However, fate turned out to be cruel – the boss of the print floor told Ray as he submitted my “Stop Press” at 2a.m: “Never heard of him, mate – I’m not stopping the presses for that.”

So my 15 minutes of fame had to wait for another day… Life in the rough and tumble of Fleet Street could be cruel back in the day.