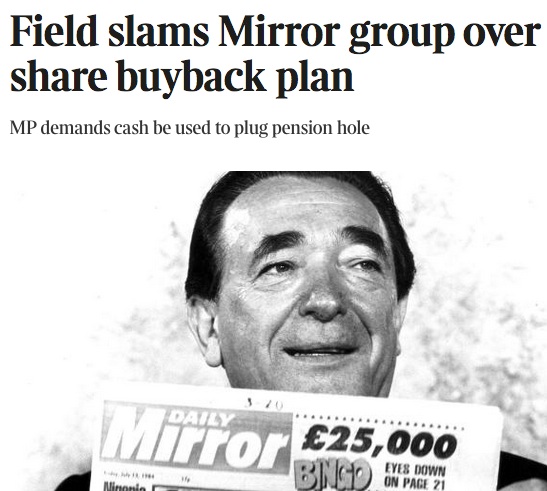 IN the wake of the BHS pension furore, two recent articles in The Times – one chillingly illustrated with a picture of Robert Maxwell – criticised Trinity Mirror for its share buy-back policy at a time when the company has high pension-fund deficits. And experts have called for the Pensions Regulator to be more pro-active.  [Cutting, right, from The Times, Jan 2, 2017.]

FRANK Field, MP, who has earned a reputation as pensions watchdog, has suggested the Pensions Regulator should block Trinity Mirrorʼs move to spend ££millions on a share buy-back – and instead spend the money on reducing its pensions shortfall.

Amid growing disquiet over the fate of pension funds following the BHS and turkey firm Bernard Matthews affairs, Mr Fieldʼs stance has been supported by other experts. They also criticise the company for distributing cash to shareholders, saying the money should be spent on reducing the £426 million pension-fund deficit.

Mr Field, chairman of the Commons Select Committee on Work and Pensions, told The Times: “Here is an obvious case for the Pensions Regulator to act when the company is worth less than the deficit and yet is embarking on a £10 million share buy-back. Any spare money should be going towards reducing that deficit.”

He also challenged the agreement between the pension fund trustees and the company for a recovery plan allowing Trinity Mirror 13 years to close the deficit gap as “far too long a period in which to balance the books”. He added that this was another aspect which should be investigated by the Pensions Regulator.

Among other experts questioning the companyʼs strategy, former pensions minister Baroness Altmann was quoted: “Trinity Mirror is one of those companies with a massive pension scheme and a rising deficit. Itʼs hard to see how a share buy-back squares with this situation.”

Highly respected independent pensions specialist John Ralfe pointed out that in 2012 the company cut a planned £100 million deficit contribution to £30 million to repay other debts, in effect putting unsecured bondholders ahead of pension fund members.

He added: “It cannot be right for Trinity Mirror to be giving extra cash to shareholders when there is a huge hole in its pension scheme, especially as it reduced pension payments by £70 million as recently as 2012. If the law is not up to the job of preventing this, parliament should pass new laws.”

In reply, Trinity Mirror said it had agreed to pay an extra £7.5 million contribution to its schemes when opting for the buy-back. A spokesman said: “We fully consulted the pension fund trustees and the regulator was notified. We remain committed to addressing our pension scheme deficits and believe we strike the right balance between payments to the pension schemes and returns to shareholders whilst maintaining headroom for investment.”

The 2012 cut in contributions had been approved by trustees.