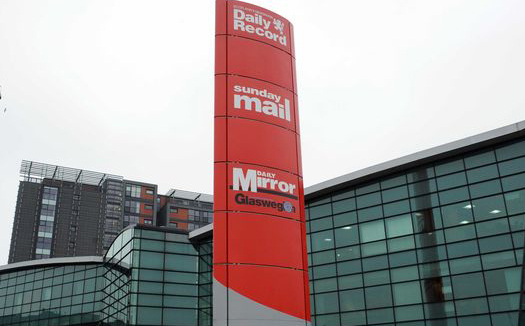 TRINITY Mirror chief executive Simon Fox faced another robust Q&A session, this time at the AMP’s Scottish annual meeting on November 2. Print-v-digital and the £220m Local World deal were on the agenda.

Trustees’ chairman Joanna Matthews announced that, for the first time, assets of the Mirror pension schemes have topped £1billion – although the pensions deficits have also increased.

Mr Fox admitted that Trinity Mirror’s national newspaper circulations are falling: “We’re in decline but declining more slowly than our competitors.” And despite the concentration on on-line business – page views are up 48 per cent and the group’s monthly audience is now 98 million visitors – digital revenue still does not offset the print downturn.

Pressed on when digital income would produce substantial profits to offset the print losses, he replied: “When is the tipping point? There is no doubt it will happen. Print is in decline, will remain in decline and to think otherwise is foolish.

“Smartphone use is growing and will be enormous. The Guardian has passed the tipping point, although there are other factors connected with it being a Trust.”

Asked about hearsay that the Daily Record was showing a loss some days of the week, Mr Fox declared: “The Daily Record remains a profitable part of Trinity Mirror across the week and I’m not sure how useful it is to break that down day by day.”

The Local World deal and development of new business, he said, “…are good for business, good for our shareholders and good for our pension fund – we are a larger, stronger and more successful business with all the benefits that scale can bring”.

Joanna Matthews said the investment climate continues to remain challenging, with long-term interest rates at a historic low. She said that the company continues to pay significant amounts into the pension schemes, currently £26 million a year.

Pensioners affected by the Aviva buy-in of pensions of those who retired before 1992 have told the AMP they are uncomfortable that their pensions will no longer be paid from the Mirror pensions office but by the insurance company. Joanna Matthews gave them an assurance that under their new Aviva policy they will still receive the same annual pension increases as paid by Trinity Mirror to all other Mirror pensioners in our schemes.

The meeting was told the AMP in Scotland is being reorganised to take account of the fact that it is increasingly difficult for committee members to make the journey to London. In future, a formal Scottish committee will meet in Glasgow at regular intervals and new committee members will be sought.