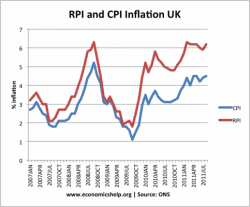 The Office for National Statistics (ONS) has rejected proposed changes to the retail prices index (RPI). The alterations would have brought RPI more in line with the consumer prices index, which is the official level of UK inflation and targeted by the Bank of England when it sets interest rates.

The decision follows a two-year consultation on RPI, first calculated in 1947, which has fallen out of step with international standards. The method of averaging prices in the RPI has tended to keep the measure around 0.9 percentage points higher than the consumer prices index (CPI).

Any change would have had wide-ranging implications for a host of prices and interest rates that are pegged to the measure. RPI is used as the benchmark for index-linked corporate bonds and Government-issued gilts.

Changing it would have lowered returns on annuities, which are backed by gilts, as well as index-linked National Savings certificates, the returns on which rise with RPI. Some final salary pension payments are also linked to RPI. The proposed move had been described as a ‘stealth attack’ on retirement and savings incomes. Ros Altmann, director-general of Saga, said the decision not to alter RPI was ‘excellent news’.

Retirees are already suffering historically low returns on their pension pots. Using the existing RPI measure, a 65-year-old man cashing in his £100,000 pension pot would get an annual income of around £3,665, rising to £6,560 when he is 85.

Had the ONS pressed ahead with the change, it would rise to just £5,500 a year in 20 years’ time, according to figures from Hargreaves Lansdown. Over the course of his 20-year retirement, this would add up to a difference of nearly £10,000.

Maintaining RPI will have some negative financial effects for individuals. Regulated rail fare rises are linked to the index and will continue to rise more quickly. Some regulated utilities are also based on RPI, such as water bills, as is duty rates on alcohol, tobacco, gambling and fuel.

Tom McPhail from Hargreaves Lansdown said: ‘This will be welcome news for all those dependent on pension benefits, who might otherwise have suffered a real terms drop of between 0.5 per cent to 1 per cent a year in their income.

‘It will probably come as a disappointment to employers sponsoring final salary schemes. A reduction in the rate of RPI would have reduced some pension scheme liabilities; this in turn would have reduced the amount of money which employers have to pump into these schemes to reduce their deficits.’

In order to address concerns that RPI is outdated, the ONS will introduce yet another inflation measure, RPIJ, which uses internationally recognised Jevons methodology to average prices, rather than the Carli index that RPI is based on. RPIJ should better reflect changes in prices on some items, for example clothing.

Should pensioners have their own inflation measure?

Pensioners have long complained that no inflation index fairly reflects rises in their cost of living. Older people tend to use a higher share of their income on heating and feeding themselves and, as such, have suffered disproportionately from energy and food price rises in recent years.

CPI and RPI include many things that have not risen in price as much, keeping those measures lower, but which pensioners rarely spend their money on. Pension incomes linked to either of these can therefore fail to reflect their additional costs.

Experts have called for the Government to use a specific pensioner’s inflation index to determine changes in pensioner income. The ONS already publishes a pensioners’ inflation index, but it is not linked to anything.