Optimism at our AGM 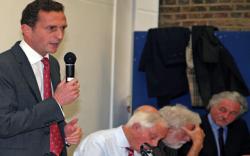 Trinity Mirror chief executive Simon Fox had an upbeat message for AMP members at the Association’s annual meeting in London on October 21, writes TOM BROWN.
He was satisfied with progress on the creation of “a dynamic and growing media business” that would benefit both pensioners and shareholders. And he and chairman of trustees Joanna Matthews both predicted that “a good deal” on company contributions to the pension funds would be signed off soon.

The attendance of Simon Fox and company secretary and group legal director Paul Vickers, and their readiness to answer questions, was significant for the AMP, and welcomed as recognition of the importance of pensions both to AMP members and to Trinity Mirror.

New deputy finance director Philip Brown also attended. He has taken the major responsibility for pensions following a change in reporting procedures at TM.
Simon Fox spoke of the “very special and very unique institution that is Trinity Mirror”. “We believe  the interests of our key stakeholders – our pension funds and our shareholders – are very much aligned. We want to grow in value for all our stakeholders.”

He admitted: “Not everything has gone according to plan. We have been in the news for the wrong reasons recently because of historical legal issues.”
(These “historical legal issues” involve a number of claims relating to phone hacking. MGN has set aside £4 million to deal with civil claims.)
On company finances, Simon Fox said borrowings would be considerably reduced in the current financial year: “This is in part due to the support shown in regard to pension contributions but mainly due to the cash-generative aspect of the business.

“Really, what gives me reassurance is that we have embarked on a very clear strategy for a dynamic and growing media business that is part of our customers’ everyday lives.
“Although print has been declining and is still declining across the market, we want to make sure that we consistently outperform our competitors. I’m delighted to say that the Daily Mirror is consistently outperforming the others as ‘the intelligent tabloid’, and also as the platform for customers to get their up-to-date news on social media, on mobile telephones, tablets and on-screen.
“It is incredibly heartening to see the Mirror is the fastest-growing digital news site in the country, with 90 million unique visitors to our digital websites.
“None of this would be possible if we didn’t have the right people, and what gives me most pleasure of all is that we are attracting and holding the right people and morale has improved right across the company.”

Joanna Matthews revealed that the latest valuation of the pension funds was about to be signed off. She said: “Funding is vital and, while long-term interest rates rose and the performance of our pension scheme investments has been consistently good, there is still a big gap to be plugged.
“The contributions deal we are hoping will be signed off with the company is, I think, a very good one and provides us all with a lot of protection.”
The merger of the “Old Scheme” (Mirror Group Pension Scheme) and the Past Service Scheme with the MGN Pension Scheme (the “New Scheme’’) was still being examined by the Pensions Regulator. The levies payable by the Past Service Scheme to be covered by the Pension Protection Fund, guaranteeing payment of benefits, were being negotiated.
“The mergers are best for members as a whole, but only if we can be sure they are not going to be worse off if certain things were to happen in the future,” she said. “I do hope that in 2015 I will be able to report that the funds have been successfully merged.”

AMP Committee member John Hemple asked a series of tricky questions about funding levels – the difference between the total amount needed to provide all the benefits and the assets available – as a measure of the health of the schemes. It was agreed to review these figures and consult further with the trustees. Treasurer Roy White reported that AMP membership is now 2,496. The meeting voted to continue members’ contingency payments for a further year.
All current AMP officers were re-elected unopposed.