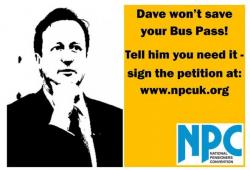 The National Pensioners Convention, to which the AMP is affiliated, has launched a new online petition calling for the continuation of universal pensioner benefits such as concessionary bus travel, the winter fuel allowance and free prescriptions.

It reads: “Politicians from all the main parties have suggested that the winter fuel allowance, free bus pass, TV licences for the over 75s and prescriptions for older people should either be means-tested or withdrawn altogether. This represents an unfair attack on the benefits that older people have campaigned for over the years – partly in recognition of the inadequate level of the state pension – and we call on Parliament to oppose any such changes.”

When the petition reaches 100,000 signatures, it will go before the Work and Pensions Select Committee and be debated in Parliament.

You can sign the petition: HANDS OFF UNIVERSAL PENSIONER BENEFITS’ PETITION HERE: http://epetitions.direct.gov.uk/petitions/49599