How I captured the moon 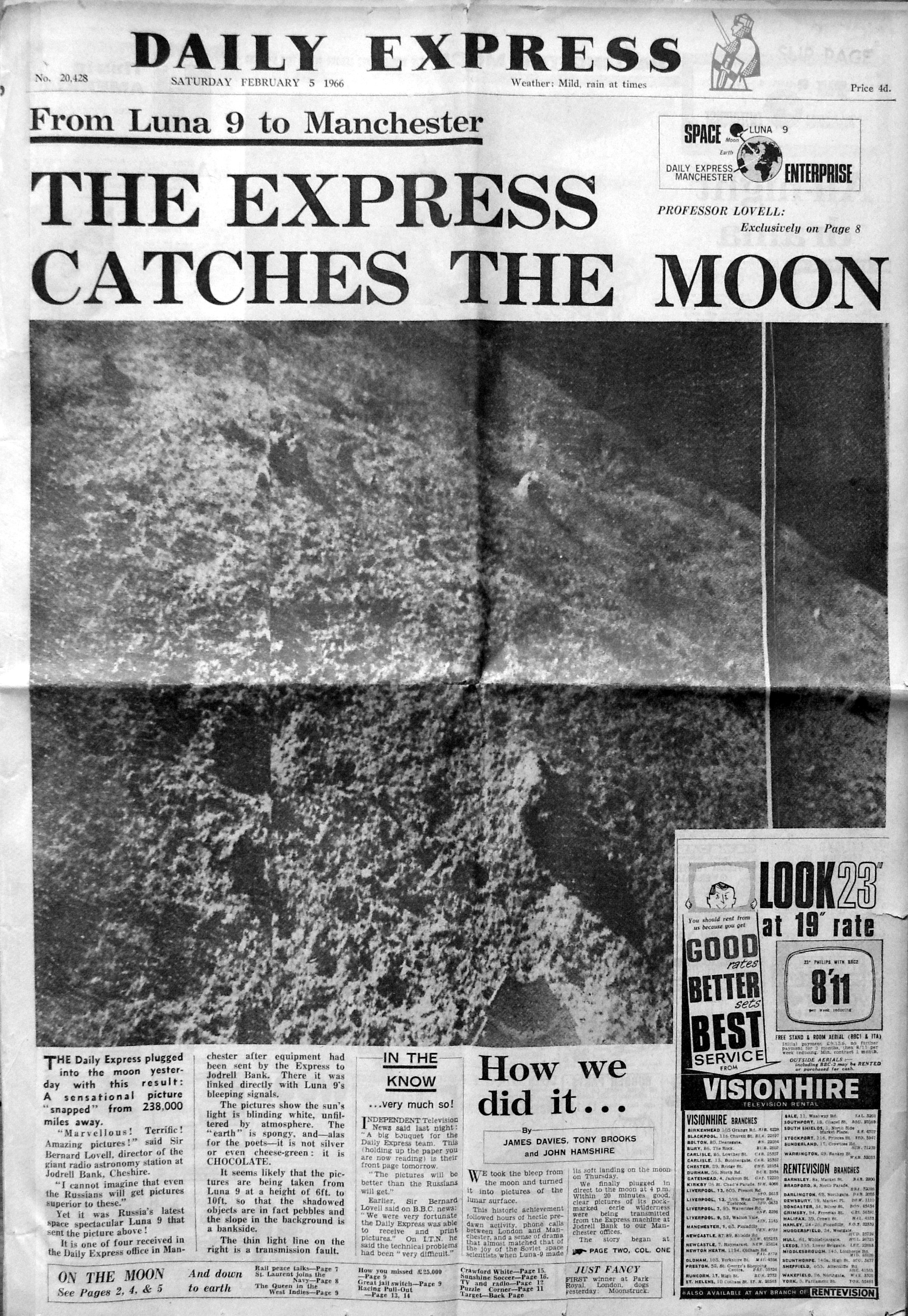 WHEN I joined the Daily Express in October 1965, aged 23, I was blissfully unaware that within five months I would play a pivotal part in landing one of the most exciting exclusive stories in the history of journalism. The famous Daily Express headline was: “The Express Catches the Moon.” The Sunday Telegraph very kindly said it was “The scoop of the century.”

The big event happened in February, 1966, just four years after the Cuba crisis and bang in the middle of the Cold War.
I was so fascinated by the post-Sputnik era I begged the newsdesk to send me to Jodrell Bank, the famous radio telescope founded by Sir Bernard Lovell in 1945 at a site in Cheshire, 15 miles from the Daily Express building in Manchester.

The story: The Russians had landed a craft on the Moon’s dark side and was taking the first pictures of the surface for the Russian audience only. The world’s press flocked to Jodrell Bank for the many press briefings hosted by Sir Bernard.
What surprised me was the fact that nobody appeared to be interested in how the Russians were receiving the pictures.

How were they being transmitted, I wondered. Because I knew nothing about photography I decided to collar Sir Bernard on his own, out of the hearing of rival hacks from home and abroad. My luck was in when I saw him crossing the room late at night. To my astonishment he told me the images from the moon were being transmitted “with the same technology used by newspapers, a form of morse code, all dots and dashes etc”.”

So I said: “So how are the Russians getting the pictures?” He said: “Because their telescopes will have your newspaper equipment, a sort of fax machine.” I said: “So if we had the equipment here at Jodrell Bank you could intercept the images?” You could have knocked me down with a feather when he replied: “Of course.”

You can imagine my delight when he accepted my offer to get the essential equipment to Jodrell Bank. I rushed to a telephone (no mobile phones then) and spoke to my news editor, who was gobsmacked. He telephoned the London office and the London editor called me back for a full explanation. He said: “Go home immediately and tell nobody. Do not file a story. Enjoy your day off. Well done.”

During the night my colleagues at the Ancoats, Manchester building knocked down the wall of the dark room and put the heavy machinery on a lorry for its 15-mile trip to Jodrell Bank.

While I was taking part in BBC Breakfast I met Ian Morison, who was a 22-year-old student astronomer at Jodrell Bank at the time of my scoop. He is now an author of six books and is a professor. He told me: “I was the First Man on Earth to see those images coming through, thanks to your newspaper. It was awesome. I was lucky to be there that night.”

* Fifty years later I was told by an old Express picture desk colleague that the Press Association had put out a story early in the morning that the Russians were transmitting their photos with traditional press equipment. Fortunately for me, my rivals did not act upon that information. In any case, the Express had a great head start.
The rest, as they say, is history.