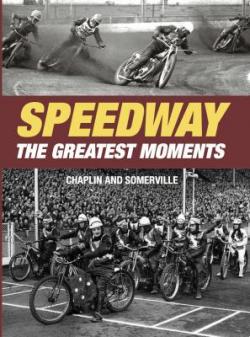 Chaplin has become one of the world’s leading speedway historians, and the new book is a companion volume to his hugely successful Speedway Superheroes published a year ago. Both books feature illustrations of outstanding quality, many dating from the sport’s pioneer years of the 1920s.

Chaplin has reported on and written about speedway racing for more than half a century. His major works include biographies of multi-world champions Ivan Mauger of New Zealand and Ove Fundin of Sweden. His Vintage Speedway Magazine was acclaimed worldwide. He has also written a history of aviation.

Chaplin says: “I’m 80 this year, and find that continuing to write keeps the brain sharp and active. My enthusiasm for the sport has never faded, and though speedway has never had a fashionable image I have always admired the men who ride. They are as dedicated and skillful as any mainstream sportsmen.

“Speedway has a rich history which I try to preserve for the modern fan.”

Speedway: The Greatest Moments by John Chaplin in collaboration with John Somerville is to be published at £19.99 by Halsgrove (www.halsgrove.com) later in the year.