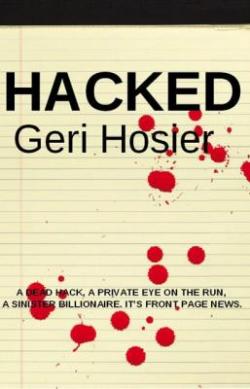 Former Sunday People assistant editor GERI HOSER, who also worked for the Daily Mail and News of the World and was launch editor of Rosemary Conley’s Diet and Fitness Magazine, has just published her first novel, Hacked. Geri is married to former Daily Mirror and Sunday Mirror executive Mike Ryder.

“Smart and funny London murder squad boss Liv Paxton is hunting the men who murdered the reporter at the very heart of the celebrity hacking scandal. Her best friend, glamorous and cynical newspaper boss Louise Brighouse, reckons half the people her contacts book had motive! But as the killers claim another victim, Liv discovers the dead man had been tortured, and by professional interrogators, before he died. What secret story was so dangerous that it cost him his life?Liv quickly finds herself of up against powerful and implacable enemies – on both sides of the law. She finds her own life on the line as she peels back the layers of deceit and treachery to unveil the most terrifying criminal conspiracy London has ever seen.”

For more information or to buy online, go to http://www.amazon.co.uk and search for: HACKED Geri Hosier.