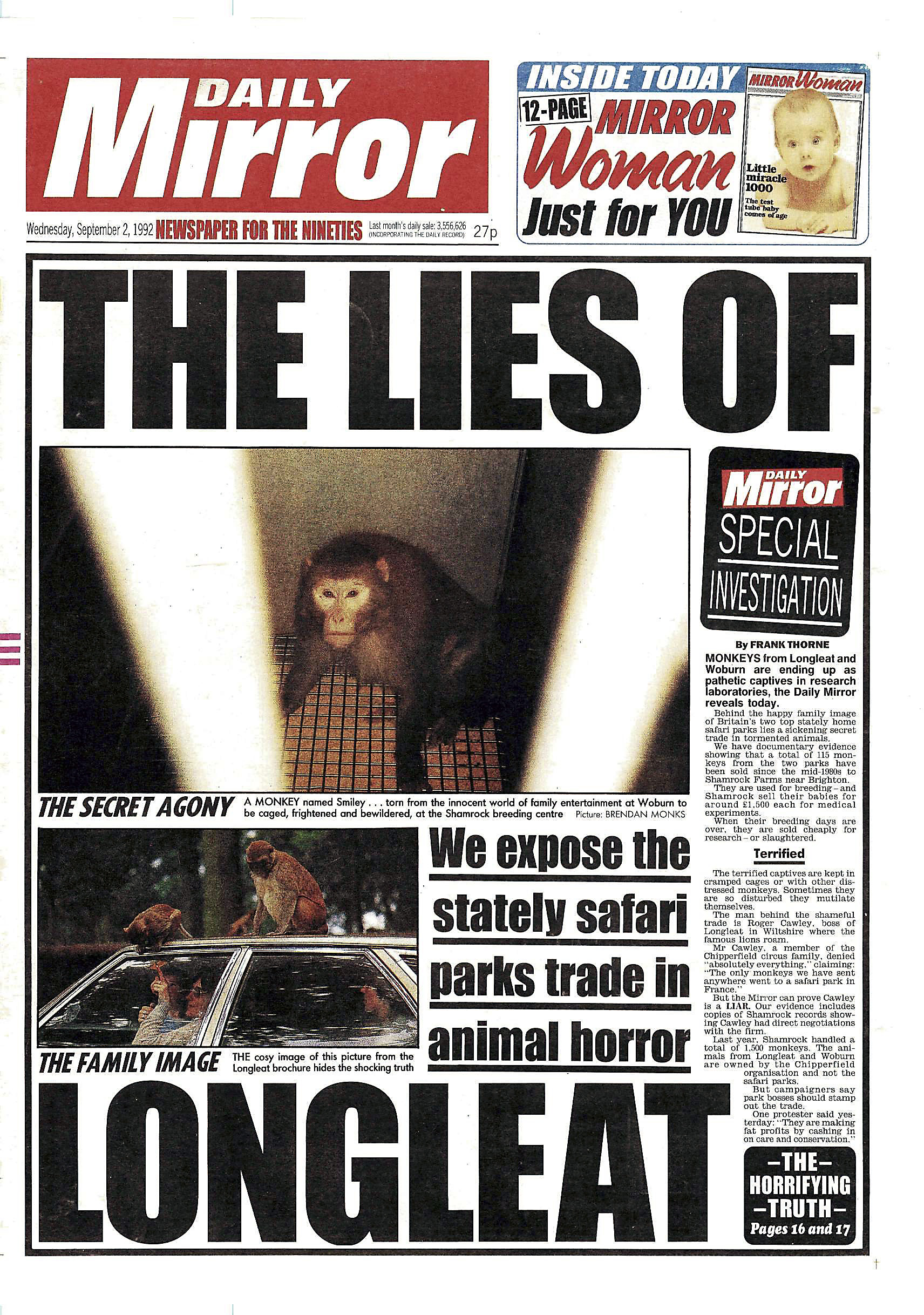 THE passionate animal-loving Marquess knew nothing of the horrendous fate of rhesus monkeys from Longleat’s safari park, and was absolutely appalled, so agreed to speak to me exclusively. It was 1992, and I had received good information from a top contact at the British Union for the Abolition of Vivisection that BUAV had undercover staff looking after animals at Longleat following a tip-off. They eventually uncovered documents proving the trade, the safari park manager behind it, and the company buying the monkeys for experiments.

I had copies of documents, and interviewed the undercover workers to check that everything was 100 per cent true before I put the investigation up to the news desk as a possible exclusive. I needed the Mirror’s backing so I could organise a photographer and journey down to Wiltshire to front-up the villain of the piece. I alerted my great mate on the Mirror, photographer Brendan Monks, who had worked with me on the Sunday People. I approached Len “Grumpy” Greener. He gave me his usual aggressive greeting: “Thorne, what do you want?” I replied: “I don’t want anything, Len, but I’m going away on a big story and unless you give me a photographer, you’ll have big white spaces where the pictures should be when it makes the paper!”

Len was not so green as cabbage-looking, as they say up north, and not as grumpy as he tried to act. So eventually Brendan and myself headed for Longleat – with one additional passenger. To make it look like we were a proper tourist group, my then partner, Janet Lewis, joined us for the ride. Brendan got the pictures we needed of monkeys climbing all over visitors’ cars, so our tour of the park was successful. But we had a couple of hairy moments. We had a stand-off with a huge bull rhino close to the road where we had stopped briefly. He looked grumpier than Greener on a good day, so we took no chances and waited, hoping he was not about to charge. Eventually we eased past him very slowly and very quietly, not revving the engine. 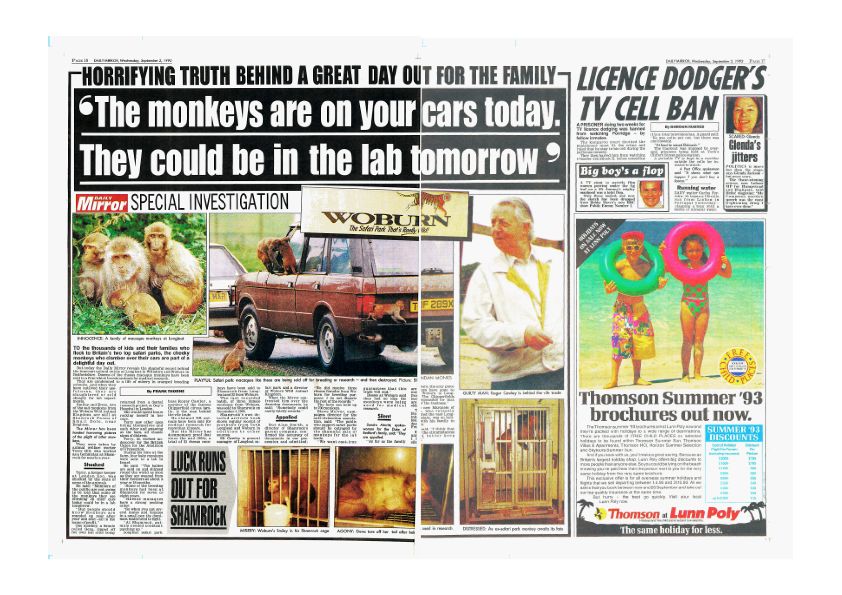 Of course, once we entered the safari park, for reality’s sake we had to do the whole tour – not simply photograph the monkeys. We were shut in from one enclosure into the Big Cats section and watched with a mixture of awe and horror as a huge cheetah had a couple of attempts to scale the giant fences to get at the lions in the next enclosure. To our astonishment, the beast did manage to climb over and it landed down on the ground, but inside the no-man’s-land gap between the two massive fences. It had nowhere to go. I sped my office car round to the gatekeeper, a Sid Little lookalike, and told him what we had just seen. “What! The big cat’s inside with me?” he screamed. He locked his cabin, which was in the middle of no-man’s land, and picked up the phone for help. Thankfully, he let us continue on out of the park. I don’t think he ended up as the cheetah’s lunch.

We then drove to the outskirts of the estate and staked out the tied cottage where the park manager lived, and Brendan successfully snatched the villain’s picture. Job done, or so I thought. Brendan went back to London and I stayed on overnight in Bath. I filed my exclusive late that afternoon and waited for a while to call the desk, only to be told: “You haven’t got a story here…”

I was stunned and for once,  a bit lost for words. After all these years had I lost my touch? Well, I knew I had the story. My attitude to life and journalism is that there are no problems, only solutions. So the answer was simple – phone the Marquess and put the whole scandal to him. I felt he needed to know what was being done in his name. So I phoned Lord Bath’s office but his Lordship was away on holiday in France. When I explained to his personal assistant who I represented and how serious a matter it was, I was given his Lordship’s holiday number. There were no mobiles at the time, and because I was on the road travelling back to London, I used a public call box and my British Telecom phone card to call Lord Bath the following day.

He took my call in France. He knew nothing about the awful fate of his rhesus monkeys being sold for cruel experiments. He gave me a considered statement saying he was horrified and would investigate the Mirror’s revelations personally. If what I told him proved to be true, he said, he would not hesitate to sack his park manager and stop this sickening trade. The reputation of his family-friendly safari park was at stake. I arranged to fax the documentary evidence to his office, and Lord Bath expressed his gratitude to me and the Daily Mirror for bringing this cruel practice to his attention.

So I definitely had my story now. I remember being in the late Richard Stott’s office when he wrote the front page headline: “THE LIES OF LONGLEAT”. My story was the splash and two pages inside, with brilliant pictures from Mr Monks, one of the best in the business. As you can imagine, it all caused a huge stir. And the new Marquess of Bath was true to his word. He sacked the guilty manager and put a stop to the trade in monkeys from his world famous safari park. Top man. RIP Alexander Thynn.