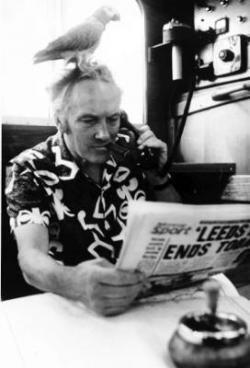 The term “legendary” is over-used these days but it can truly be applied to the unforgettable Hugh Cudlipp. He was born 100 years ago this year – in August, 1913 to be precise.

He remained pivotal to the Daily Mirror through his chairmanship of Mirror Group (1963-1967), and later of the International Publishing Corporation, until his retirement in 1973. On his retirement he was created Baron Cudlipp, of Aldingbourne.

His autobiography, Walking on the Water, was published in 1976. His 1953 book Publish and be Damned: The Astonishing Story of the “Daily Mirror” was reprinted in 2009 by Revel Barker Publishing.

The 100th anniversary of Hugh Cudlipp’s birth gives us a perfect opportunity to display this memorable photo of Hugh on his boat, with his famous parrot atop Hugh’s equally famous shock of hair. We’re not sure whether the bird is Bertie or Bobbie.

Note the ever-present cigar, firmly clamped. And the typical pose – reading the Daily Mirror, phone in hand, ready to berate or compliment a colleague back at the shop.

Hugh Cudlipp died in 1988 but remains an icon in the newspaper industry and to those who worked with and for him.